How not to destroy your workflow through a new CRM 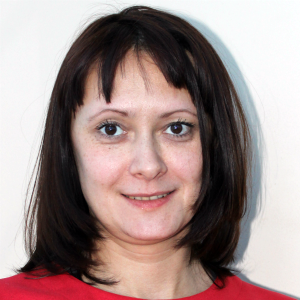 When the control system does not work, it can be upgraded or changed. It is believed that this is a long and inefficient process, so the company keeps postponing it and continue doing business as usual. We will tell you how we helped a construction company to make a new management system and quickly adapt to it.

One construction company had a CRM. It was made by a freelancer 5 years ago. Everyone is used to it, but it turned out that it was difficult to develop and change. The system is rapidly becoming obsolete: you can work only in the office, there is no mobile application and no chat rooms, each new function costs one-third of the price of the system itself. In order to change something, you had to change the framework. As a result, the system began to restrain the business development, so the company decided to replace it.

They asked us to help develop and implement a new system.

Having considered all of the options, we decided to go with Bitrix24 — in addition to CRM, it has tools for managing the company and its processes. 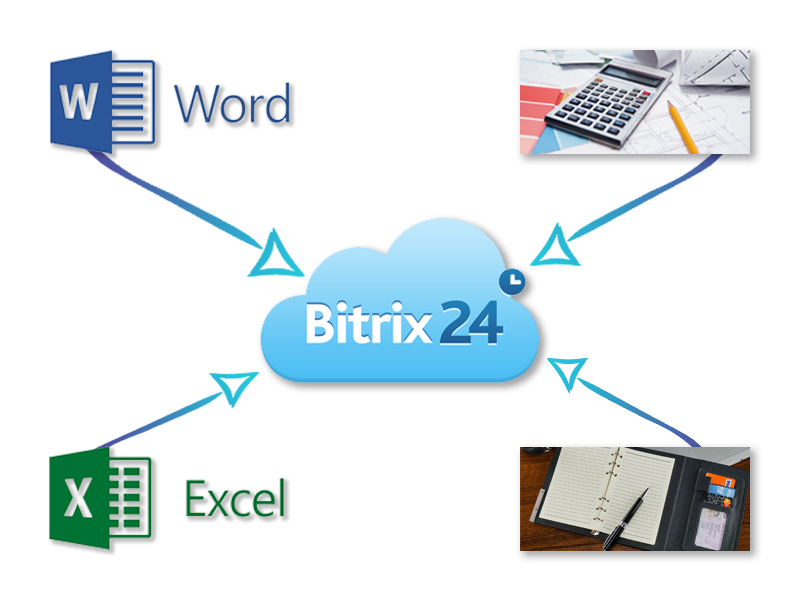 The new system replaces a day planner, Word, Excel and working calculators. Everything is accessible fr om the smartphone - it's convenient to use in the field.

We deployed an old application and conducted its audit. So we quickly figured out system requirements, essential functions and processes correlations.

We found out the main disadvantages of the system:

After this we have come up with a work plan taking into account all complaints and wishes.

We divided into three groups tasks for creating a new system:

60% of wishes could be fulfilled using Bitrix:

Group 2. Tasks or the way business process can be reviewed

We slightly altered the tasks wh ere it did not significantly change the business process, so that 15% of what needed to be done could be implemented with the help of Bitrix:

The remaining 25% of the functions needed to be developed and implemented again:

The second group issues were revised and moved to the first. As a result, we got 75% of the tasks which the solutions have already been done.

We divided the work into stages - 3 weeks for each, so we could quickly implement the customer's requirements, even if they changed monthly.

At each stage we discussed new functions with those departments for which a specific module was developed: top management, accounting, salespeople, call center. We deployed the demo server and invited participants to try how it works, assess the usability. This way we got to see possible defects and quickly fixed them.

We set up sales funnels and those business processes that already existed in Bitrix24, then integrated the system with the site and accounting. 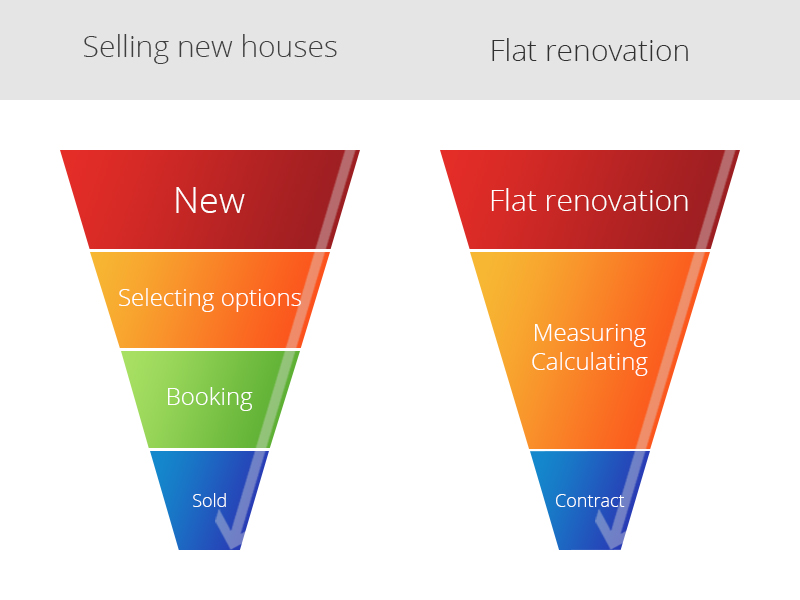 In the new system, the sales funnel was updated: booking was added. Now, if an employee has booked an apartment, everyone sees it..

Some of the ideas were taken from the old system and eventually improved. In order to do this, the usability specialist spent a week communicating with managers and supervisors: they watched how they fill in transactions, call customers, send out acts and reports. The other interfaces were designed from scratch.

We took into account that:
This is how we simplified the interface for the user.

These are modules that relate to a specific unique business process of the company. For example, the stages in the funnel can not be changed manually: the manager can not "postpone" the apartment for "later" - if there is no money - there is no apartment.

We checked everything, even small non-obvious details in the work, and the sequence of the business process steps: how to logically fit the module into the process, or are there dead-end branches which users can not exit independently.

For example, the process of the transaction can be "frozen" until a certain date. The manager sets a date for "unfreezing", and when it comes, the system creates a task for them. There they indicate whether to return to it or not.

And what if you need to "unfreeze" before this date? This option was not even included at first, but during the testing phase, this need was identified and solutions were proposed.

The new tool means new issues, while employees are adapting to it. There are several reasons:

They are accustomed to the old system, and do not want to learn a new one. Employees had an application with which they used for years, knew each input field, each button, such as bypassing the fail with downloading of several files. The work was done in semi-automatic mode. The interface of the new system is very different. It is necessary to get used again, it is impossible to work on autopilot, it takes more time - employees get annoyed about everything. It is difficult to determine what is really uncomfortable, and what is simply unusual in all this negativity.

They are not sure that they will cope with the new system.
To raise their authority in the eyes of other people and in their own eyes, people are looking for defects in the environment. It's not me stupid, it's the system.

Previously, some employees used the defects of the old system to their own benefit. For example, conducted transactions without putting them into the system. The new system didn’t allow this - everything is transparent and honest.

We tried different approaches while training. Some were successful, others were not. We will tell you more about approaches and the training methods that turned out to be the most understandable for employees, in our next article about CRM-systems.

The development of the first version lasted six months. During this time, we created unique modules and customized the standard ones from Bitrix24. All these actions went as smoothly as possible for the employees, so as not to affect the work of the company as a whole.
Later, we'll tell you how to help employees adapt to the new system, so that the work does not get held up for days while the accountant looks for the right button. And also how to help the entire company to get used to a new management system over the weekend so that on Monday the work won’t freeze.